What is Crossword Puzzle 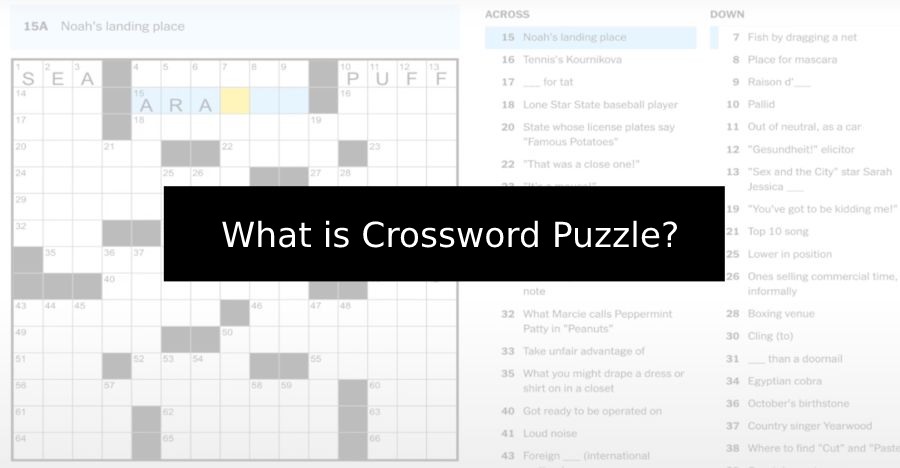 Crossword puzzles are possibly the most popular word games throughout the world, and they exist in many different languages. Not only are they fun, but they can improve your memory and help you focus.

In America, a crossword typically takes the form of a square or rectangular grid inlaid with both solid and numbered cells. A list of corresponding across and down clues is provided. The answers must be placed correctly into the blank cells in order to solve the puzzle.

Not all crossword puzzles are created equally. They come in different shapes and sizes and their difficulty ranges from easy to very hard.

The History of the Crossword Puzzle

The first crossword puzzle was created in 1913 by English journalist Arthur Wynne.

It appeared in the Sunday newspaper New York World. Unlike the crossword puzzles you’re used to seeing today, Wynne’s puzzle was diamond shaped and contained no solid squares.

It also had a different name. It was called a “word cross”. This was turned into “crossword” by accident due to a typographical error and the new name stuck.

In 1924, The New York Times claimed that crossword puzzles were a waste of time and predicted that they would be a passing fad.

They didn’t begin publishing crossword until 1942. Ironically, the paper has now become the producer of one of the world’s most popular crossword puzzle series.

The Times publishes daily puzzles in print and its own app. These puzzlers’ favorites become increasingly difficult throughout the week.

There are several different types of crossword puzzles, as well as the most familiar standard puzzle. These include:

Though they are not as popular as regular crossword puzzles, double-clue crosswords are fun to solve. In this type of puzzle, two sets of clues serve one grid. Typically, one set of clues is straightforward, while the other is cryptic.

It’s a great way to get the gist of cryptic clues if you are a beginner because both matched clues give the same answer. This means that you can choose which set you follow from the outset or use a combination of both. A variation of this puzzle is known as Siamese Twins crosswords. In this case, you are provided with two grids and two sets of clues. The clues are mixed so you have to decide which answers go with which grid.

A cryptic clue is comprised of two parts; one straight and one cryptic. The straight part defines the answer, this part will appear at the beginning or end of the clue. Its cryptic counterpart is the wordplay element in the clue. Wordplay devices used in cryptic crosswords include anagrams, hidden words, and double definitions.

This variation is comprised of two parts; a set of clues and a grid. Each clue has a set of numbered blanks, each one representing a letter in the answer. As the clues are solved, the letters can be placed into the numbered cells in the grid. When the grid is completed, it will reveal a quotation.

In some acrostics, the first letter of every answer reading down the list spells out the quote’s author and the title that the quote is taken from.

Cryptograms, also known as cipher crosswords, date back to 19th century Germany. In this type of puzzle, there are no clues for each entry into the grid. Each cell in the grid has a number that corresponds to a specific letter. The challenge is to determine the proper letter for each cell.

Two or three words are usually filled in to give you a head start. There is a chart beneath the main puzzle where you can fill in the letters with their corresponding numbers to make it easier for you to enter them into the main grid as you go.

Also known as a crusadex, a fill-in crossword is comprised of a grid and a complete list of words to be entered. There is, however, no set of clues as to where in the grid the words should be entered. The challenge is to fit all the words into the grid so that they intersect correctly.

A skeleton, or diagramless puzzle, has a grid and a set of clues. It differs from a normal crossword because the grid contains only two or three solid cells. This can help because the grid will be symmetrical, though it could be vertically or horizontally mirrored. The challenge is to work out the length of each clue and where to set the solid cells.

If you fancy yourself something of a cruciverbalist – someone who likes or is skilled at solving crosswords – and you’re in the mood for an enjoyable mental workout, check out the selection of NY Times crossword puzzles.